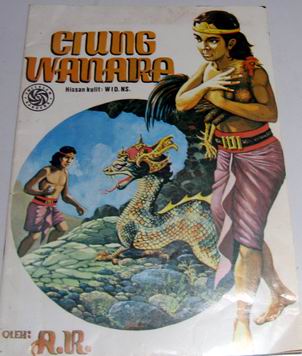 Long time ago in west Java there was a kingdom called Galuh.  The ruler was King Barma Wijaya Kusuma.  He had two wives – Pohaci Naganingrum and Dewi Pangreyep.  At that time both of them were pregnant.  The king was very happy when Dewi Pangreyep gave birth to a baby boy.  The king named him Hariang Banga.  He was a handsome boy.

Several months later Pohaci Naganingrum also gave birth.  Dewi Pangreyep helped her during the birth process but she had an evil plan.  She had prepared a baby dog and gave it to Pohaci.  Then she put the baby in a box and had it thrown to a river.  Lengser, the man who received the order to throw the baby in a river, put him in a safe box and gave an egg.  Meanwhile Dewi Pangreyep reported to the king that Pohaci had given birth to a baby dog.

‘Oh, Your Majesty,  Pohaci is an evil woman.  Last night he gave birth but her baby is a dog!  They are sinners.  God had punished them.  This a shame for Your majesty the King and the whole kingdom”

The king was shocked and very angry to hear that.  He thought it was a shame for the royal family.  So he ordered his soldier to kill Pohaci and the baby.

‘There is no place here for sinners.  They must go to hell”

Then the king called his servant , Lengser.

“Lengser ! Bring them to the wood and kill them!”

Lengser, who had to carry out the order, did not dare to do it.  He saved Pohaci instead.  Then  Pohaci lived in a remote village.

Meanwhile in a village by the river lived a couple of husband and wife.  Aki Balangantran lived with his wife Nini Balangantran.  Several years had passed after their marriage but still they had no children.  Day and night they prayed to god to ask for children.  One night Nini was dreaming that she saw a full moon.  Aki interpreted the dream that they would receive provision from god.  The next morning Aki went to a river with his net to fish.  Suddenly something caught his attention.  In the middle of the river there was a wooden box floating on the water.  Then he grabbed it.  He was shocked when he saw a baby inside it.  He brought the baby home and gave him a name of Ciung Wanara.   In Sundanese language Ciung means bird and Wanara means monkey.  They were very happy since they had no children.

Several years later Ciung Wanara grew up to be a handsome and smart boy.  The egg had become a cock.  Ciung loved cock fighting.  He went everywhere to play cock fighting game.  His cock was so quick and strong that it won all of its fights.  Soon he and his cock became famous in Galuh.  Everybody knew them.

Then the king of Galuh who had many cocks and also loved cock fighting heard the news.  So he ordered Lengser, his faithful assistant, to find the boy.  As Lengser got to Ciung’s house he was surprised to see the box.  He realized that it was the box he threw into the river some years earlier.  When he asked Ciung’s father he was sure that Ciung was the king’s son from Pohaci Naganingrum.   That time he wanted to do a good deed for Ciung.  Then he told Ciung that the king invited him to palace for a cock fight.  He also told ciung to ask for the kingdom if his cock win the fight.  Ciung agreed so they went to palace immediately.

Later in the palace of Galuh,  Ciung told the king that he had a condition for the cock fight.  If his cock wins, he wants the king to give him his kingdom.  If he his cock loose,  then he will give his head.  The king agreed because he was sure that his cock would win.  Then in a fierce fight Ciung’s cock won the fight.  Everybody was surprised.  The king had no choice.  He had to keep his words and give his kingdom to ciung Wanara.  Then Lengser told the king that ciung was actually hing own son from Pohaci naganingrum.  He revealed Dewi Pangreyep’s evil action.

The king was shocked and very angry.  He ordered his soldiers to arrest and punish Dewi Pangreyep.  This event made Prince Hariang Banga got very angry.  He quickly attacked Ciung Wanara.  Finally the king decided to divide his kingdom into two parts.  The border was Cipamali river.  The west of the river was given to Hariang Banga while Ciung Wanara ruled the eastern part of the kingdom.